"In most history classes, we talk about one specific thing -- like 'the South Sudan Civil War,' or 'issues in the Middle East.' Here we cover 13.8 billion years."

Bill's comment on the Experimentory's Big History course sums it up perfectly: it's a course about... well, everything. I visited Big History this week to understand what history is like when you start with the Big Bang.

The first step is to conceptualize the scale. To help, this session's two week students spent their second class day creating 100 foot-long timelines. One was marked with significant events on the Universe scale -- 8 thresholds of increasing complexity such as the Big Bang, the first stars lighting up, the formation of complex molecules, and the first life. The second timeline was marked with events in human history -- such as the development of language, our first agriculture, and the start of collective learning.

In discussion afterwards, students immediately commented on how the lines were unbalanced. "On both timelines there are long distances [early on] where no thresholds happened," observed Grace. "I think it is very hard to achieve the first few thresholds, but then the speed of achieving thresholds increased at the very end."

Grace had picked out one of the major course themes: each complexity threshold depends on specific materials and "Goldilocks" conditions. It took a long time to reach the first thresholds, but the rate of change has accelerated as each builds on those that came before. This alone changes the students' perspective. "I think human history should just be considered one event," reflected Peter. Indeed, even on the human line, everything we recognize as history occurs in the last few feet -- some events seemingly occurring simultaneously.

These students will culminate their study of Big History by considering that final event -- the Anthropocene Epoch, literally "The Age of Man."

As they enter their third week, students in the four week Big History course are digging deeper into the Anthropocene. This morning I joined them on a walk across campus to visit a guest lecturer of sorts: a huge "buttonball" sycamore tree growing in front of the Main School Building.

They began their visit with calculations: using dowels, a measuring tape, and algebra, they roughly calculated the tree's height (112 ft) and circumference (22 ft, 2 in). "This tree," Mr. Pitcher explained, "is one of four champion sycamores in this part of the country." Using their measurements, he went on to estimate the tree's age: 336 years old. "As this tree has grown since the mid-1680's, it has been witness to the rise of the Anthropocene Epoch."

Shifting gears, the class discussed how the tree had been influenced by its contact with humans. Bill noted two things: how close the road comes to the base of the tree and some heavy-duty cables that help support its huge limbs. "That's right," said Mr. Pitcher. "This road covers over a significant portion of its root system. It is amazing how well this tree has done considering we've interfered with its water. But at the same time, we have made efforts to help it hold up during wind storms. This buttonball tree is a living example of how humans can have both a positive and negative effect on the natural world."

They finished the lesson by reading and discussing "The Sycamore" by Wendell Berry. Finally they each wrote a personal reflection on what they might say if they were that sycamore.

On our way back to class, I chatted with Mr. Pitcher about the exercise. "Even just making students aware of these sorts of organisms is a valuable change in perspective. This group has been walking by that sycamore several times a day for three weeks. Yet most of them had no idea what tree I meant when I said where we were going today."

Bill told me about the four week final project they are working on. "I am studying Singapore," he explained. "I'm looking at the human and environmental history of the area. There are costs and opportunities and they all impact each other."

I, for one, can't wait to see the final result. 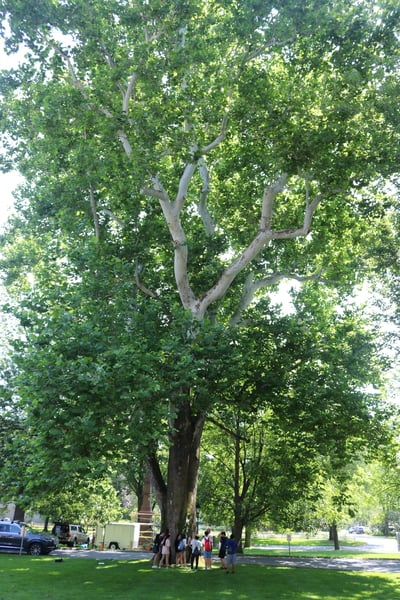