Day 10 – A Visit to Theater and Electronics

On Tuesday, Proctor Jan Menafee stopped in to visit Theater + Electronics as students learned about an actor’s emotional expression. Here is what he learned.

The Theater + Electronics clusters participated in a fun and interesting exercise with Ms. Speed in the Acting Lab today. Each cluster first split up into pairs. Ms. Speed gave each pair the same deliberately vague script to memorize and act out in front of the rest of the class. 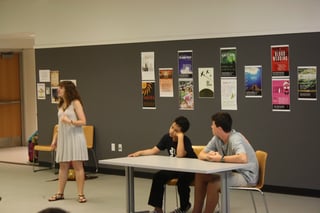 But here’s the catch: each pair also chose one of four possible relationships to exist between their two characters. After they finished performing, the rest of the class had to guess the nature of the relationship they’d chosen. This challenged the students to consider how actors can interpret and perform the same lines in an infinite number of ways by changing their tone and mannerisms.

For example, Spencer and Scott performed the script as a tired and worried father dealing with his estranged teenage son who had stayed out too late. Anne and Tysean performed as two strangers at a train station, one of whom makes the other uncomfortable as the other 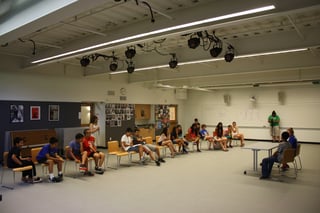 asks personal questions. I was incredibly impressed by how well everyone could act and create several unique scenes from the same script.

Our students’ talents surprised me outside the classroom as well. To express this week’s theme of “Courage” in today’s All-X Meeting, Mr. Thrasher invited William on stage to battle against Proctor Kento in a Rubik’s Cube Challenge. (William won!)  A little later, a huge group of Experimentors performed High School Musical’s “We’re All in This Together” led by Proctor Valentina. Both of these All X performances were planned to get everyone excited about performing in Saturday’s talent show. I can’t wait to see what else these kids can do then!