Deerfield Day is an Experimentory tradition. It is an opportunity to take advantage of the rich history, culture, and beauty of our corner of Massachusetts. This year students were free to choose between the Basketball Hall of Fame in Springfield, a tour of Historic Deerfield, a shopping trip to Yankee Candle & Richardson's Candy Kitchen, or a visit to two museums. Mr. Schaffer, the Experimentory's Program Coordinator, led the museums trip. Here's a little of what his day was like.

Although we'd only just shuffled into the museum moments before, my five Experimentors were already scattered. The draw of the mineral-laden nautilus shell, the ancient wolf skeleton, and the fierce smilodon were just too strong.

"Before we dive in..." The group reformed at the sound of my voice, but necks continued to crane. "In my experience, guides in museums, zoos, and parks are great resources." I gestured to the young woman who had met us at the door. "You might consider asking some questions..."

"What's your name?" That Will N never misses a trick.

After a long pause, Hans' face lit up. "Do you think that such-and-such-icus should be classified with the blank-ates or the other-thing-a-ma-bobbers?"

I beamed -- and I'm beaming again now as I write this. Can any educator help but love working with such smart and inquisitive kids?

Yuko chuckled. "I... think that would be... a good question for my boss. But I'd be happy to tell you background stories about our dinosaur footprints collection."

We were at Amherst College's Museum of Natural History, and our happy group of five students and two staff were visiting museums. My favorite.

For Hans, choosing the Beneski Museum was a no-brainer. His passion is paleo-art. "I like to look at fossils," he explains. "I think about how the muscles attach and then draw a living creature. Since soft tissues normally don’t preserve in fossils, this leaves a very big artistic opportunity for me to illustrate hypothetical organs and imagine the animals’ behavior." By the end of day his Experimentory notebook included some fresh sketches.

Hans is also a storehouse of palentological information, and his passion is contageous. "Oh, ignore that," he told Sam as they read a display together. "There was a 2015 study that changed that theory. Now scientists think..."

"Oh! That's dunkleosteus," he exclaimed a few minutes later. "Those aren't teeth." He showed Will the massive ancient fish skull. "It's all bone -- bone that self-sharpened when it opened and closed its mouth."

Daniel was equally enthusiastic about the Natural History Museum. "This is the best choice for Deerfield Day," he told me confidently. "My favorite part of the Experimentory so far." However, Daniel was all about the rock and mineral collections rather than the fossils. He has a collection of his own gathered from around the world. "I've grown some of those crystals at home," he said, pointing to a mineral sample with three-inch octagonal crystalline shafts. "But not like that. That takes thousands of years, and the right conditions."

These kids were in heaven.

Our second museum was the Eric Carle Museum of Picture Book Art. "It may be that none of

us will become children's book illustrators," I conceded before we entered the galleries. "But creative people learn from other creative people -- perhaps especially from those outside their own field. Look for insights and inspiration that can inform your own artwork, and writing, and cooking."

Carle's pieces from such works as The Hungry, Hungry Caterpillar and Brown Bear, Brown Bear were of course, beautiful. But I think we loved the gallery of dream-like illustrations by David Wiesner most of all. His often wordless fantasies combine elements of fairy tale, steampunk, and humor that all seven of us found appealing.

The last exhibit we visited at the Eric Carle was a perfect ending note in the theme of finding creative inspiration. Works of a dozen different modern illustrators hung along side older works they identified as their important influences. In the center of the gallery sat an artist's table and an invitation. Draw your own drawing inspired by these famous illustrations. Some of the results are below. Enjoy -- draw some inspiration of your own. 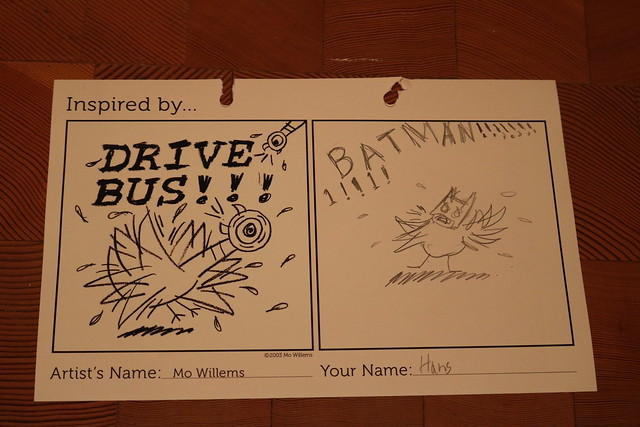