Now halfway through our summer together, our Music + Film Course Clusters finished their first major projects last week and spent Monday watching and reviewing each others’ films. Proctor Ryan Collins joined them. This is what he learned during his visit.

Today I visited our morning Music + Film Cluster. The students were introduced to a new broad concept: viewing a movie as a system. They were then instructed to collaborate and determine what went into making this system work. It did not take long for Mr. Correa to fill up the white board with various aspects of film making. The students’ brainstormed list included soundtrack, setting, lighting, dialogue, costume, designs, etc. 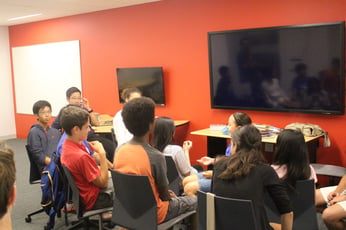 In this way, the students developed this movie-as-a-system concept piece-by-piece. Personally, I had never thought of a movie like this, as it is easy to overlook the small but intentional details that make up a film. It was truly a special moment for me as a proctor to feel like I’d learned something new from our students.

Once we had a good grasp on movies-as-systems, we watched student films they have been working on in groups since the start of the program. Some students directed, some acted, others planned and implemented the soundtrack, and many took on multiple roles. Each group had been assigned a different genre, so we were able to see how certain aspects of the system differed based on the given genre. Between a comedy, sci-fi, and horror short film, I saw the use of different acting styles, soundtrack, camera angles, sound effects, and story lines.

Interestingly, these films weren’t allowed to include any dialogue, so the students were challenged to convey a plot using other creative methods. In addition, all groups had to use Night on Bald Mountain as their soundtrack. They had to decide how to cut and mix the music to fit their genre and plot.

One of the most notable films was the sci-fi thriller directed by Amethyst. Mr. Correa was struck by the impressive camera angles mixed with variations in lighting that she used to add to the dramatic scenario.

Be sure to visit our YouTube channel after the Experimentory is over to see all six films from two classes.