As the Experimentory goes through its second year, we see just how much our program is influenced by the interests, talents, and experiences of our proctors as they run our co-curriculars, free time, dorm meetings, and residential life. Case in point: when  Proctor Jan Menafee told our office that he had experience coaching quiddich, we knew we’d be buying a set of hula-hoops.

Week 3 has brought a fun and unconventional game to The Experimentory: Quidditch! I learned how to play and coach Quidditch at Harry Potter camp last summer. Considering that one of our students submitted a picture of himself surrounded by his Harry Potter books with his application, and I figured we’d have some Harry Potter fans who would love to try out the fictional game.

Since, of course, we don’t have flying broomsticks or enchanted balls, the game is a bit different than in the books. It’s played by two teams on a field, who try to score against each other by throwing the “quaffle” (a soccer ball) through one of three goals (hula hoops hung up on tree branches). 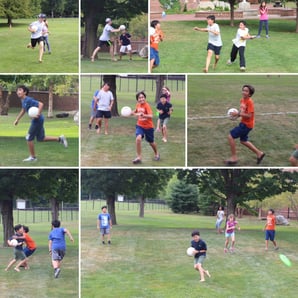 Each team has a goalkeeper and a “beater” (a defenseman) who can throw a “bludger” (a frisbee) at opposing team members to freeze them in place for ten seconds. There are two offensemen who can pass the quaffle between themselves to score ten points per hoop. And last but not least, there is a “snitch.” In the books, it is a magical flying ball that is released at the end of the game and worth 150 points. In our version of the game, the snitch is a person with a yellow ball they are not allowed to let go of. If any player takes that ball from the snitch, they then receive thirty points and the game ends.

I have coached alongside Proctor Ryan Collins this week and we have really enjoyed watching the kids enjoy themselves. Whether we are playing Quidditch, watching Quidditch or watching a Harry Potter movie, the kids are all in and very attentive. Thursday, we had our best match yet: Team Ravenclaw (Reshma, William, Joshua, Rachel, and 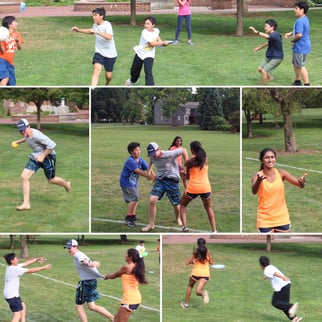 Spencer) versus Team Hufflepuff (Branden, Sami D, Coryell, Daniel, and Cami) with Scott as the snitch.  Ravenclaw and Hufflepuff traded goals back and forth to tie it at half time forty-forty. Then Ravenclaw pulled away in the second half when Reshma joined the team. William’s speed and spin moves and Joshua’s general unstoppableness had already given Hufflepuff a tough time, but Reshma brought a new intensity to the team. Ravenclaw soon had a thirty, forty, then fifty-point lead! Daniel, Hufflepuff’s beater, pulled through with some expert throwing – at one point he managed to freeze the entire Ravenclaw team. But Hufflepuff still couldn’t quite manage to score. Scott threw them the snitch at the end of the game to cut Ravenclaw’s lead to a merciful twenty points, but Ravenclaw still came away victorious!

As of this writing, we have one day left in this co-curricular rotation and the weather is looking perfect. I am excited for one last, incredibly entertaining day of Quidditch!