Here at the end of our first week, classes are done settling in and our teachers are starting to pick up pace. Proctor Kento Yamamoto visited classes on Day 5 and shares what they are up to in today’s post.

After a long day at the ropes courses yesterday, it was back to the books, or rather iPads. The Experimentors visited various different topics today.

In Theater and Electronics, the students experienced their first “electronics” day with Ms. Jimenez. They were introduced to the Arduino Board, something I wish I had been exposed to when I was in 6th or 7th grade. (I didn’t learn how to use and program an Arduino board until my senior year of high school!) An Arduino board is a micro-controller that you can program using a basic coding language.  Finally they were introduced to LED lights and Ms. Jimenez showed how to blow one up!

I visited the music and film class and Mr. Correa gave a talk on artifacts and how they relate to film. They also shared the music they created during Studio hours last night with each other. However, I spent most of my class visit time going on an Architecture + Culture mini field trip through Historic Deerfield.

For those of you that don’t know, the Village of Deerfield was first settled by European colonists in 1673 – making it old (by American standards). Old Main Street still includes many late Colonial and post-revolutionary buildings on their original sites. The students walked down this street to visit some of the houses of that era. I was impressed with how familiar some students were with U.S. history – they are 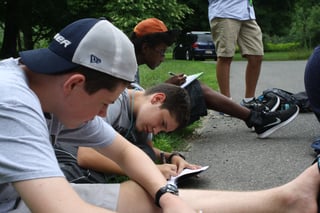 more knowledgeable than I was at their age! Mr. Payne, Ms. Sherburne, and Ms. Corcoran explained both the historical and architectural aspects of the houses that we visited. The students were given time to sketch of a feature of each house that they found fascinating: the angled roof that allowed snow to fall off in winter, the windows that had simple yet interesting designs, etc. I noticed a student who drew out the entire house to illustrate how the front door opened to the side of the house rather than facing the street.

As the Cluster Courses came to an end, the students had to decide where to spend their DFG (Dorm, Field, Greer) time. I was lucky to be on “Library” duty – not only because it was air conditioned, but also because I had got to witness firsthand the bright and creative minds of

two of our students. I had the opportunity to spend time with Jake and Joshua, who were eager to build their own marble course. Moments later, they devised this 2 1/2 foot contraption that was both complex and elegant. I was asked to be the “marble-dropper”, and so came the moment of truth. The marble was placed at the “start zone”, and down it went along yellow spirals, three paddle wheels, and multiple bridges that interconnected sections of the marble maze. Both boys were jumping up and down and high-fived each other. No better way to end the academic portion of the Experimentory than to see two students go above and beyond with maximizing both their creativity and character.