Friendship is often born out of adversity, and there is something especially adverse about New England weather. Program Proctor Ryan Collins tells of his experience chaperoning a group of Experimentors at Six Flags New England in some clear but uncomfortably hot temperatures.

After a night of bowling in Shelburne Falls, the students woke up early to get breakfast, hop on a bus, and head to Six Flags New England. I was both surprised and impressed by the energy and excitement on the bus even after a full week of classes, activities, and trips. Some of the students had been to this particular amusement park before and many had been to ones like it, but for others this was a totally new experience.

The day before we had divided the students into groups based on their interest in what the park had to offer – thrill rides, water slides, carnival games, etc. I was impressed at how in tune and honest our students were about what they wanted to do instead of basing their choice on what their friends wanted. It was clear that the kids were willing to join a group with any of their fellow Experimentors if it meant that everyone would enjoy the day. That is something that doesn’t always occur so smoothly with this age group.

Upon arrival, my group and I realized that our biggest enemy of the day would be the heat. My group consisted of Alex Y, Coryell, Amethyst, Gerald, Aerin, and myself. Instead of hearing any complaints from my group, I heard strategies and compromises to avoid the heat and enjoy the day doing things that everyone agreed to. Our first stop was an arcade (that had air conditioning!) where the students played a variety of games. When Coryell noticed a stuffed animal in a claw machine that she really liked, the entire group set out on a mission to get it. They all collected tokens and started to play, surrounding the glass and directing the claw.

Unlike the structured team activities at the ropes course, this teamwork was created solely by the students themselves as they shared the common goal of retrieving the cat for Coryell. As I filmed (see below) I was in awe of their ability to work together without direction from adults. They did not get the prize in the end, (a different lesson about arcade and carnival games there) but the group seemed very happy with their effort regardless. And it was equally satisfying for me to watch them work together the way they did.

As the afternoon wore on, the heat only intensified. While we took a break for ice cream in the shade, Amethyst, Mr. Kelly, and I had a great conversation that helped us fight the New England heat. We shared about our favorite places (especially places without oppressive heat). I enjoyed learning about Amethyst’s home country of Barbados – a place I knew very little about. It served as a good distraction and I think we learned more about each other.

All-in-all, our group had a fun day at the park and I think we all learned about each other and our team’s strengths. As we rejoined everyone else at the buses, I heard many tales about wild rides. Everyone enjoyed the trip and the relaxing movie night that followed. (Which was also, thankfully, air conditioned.) 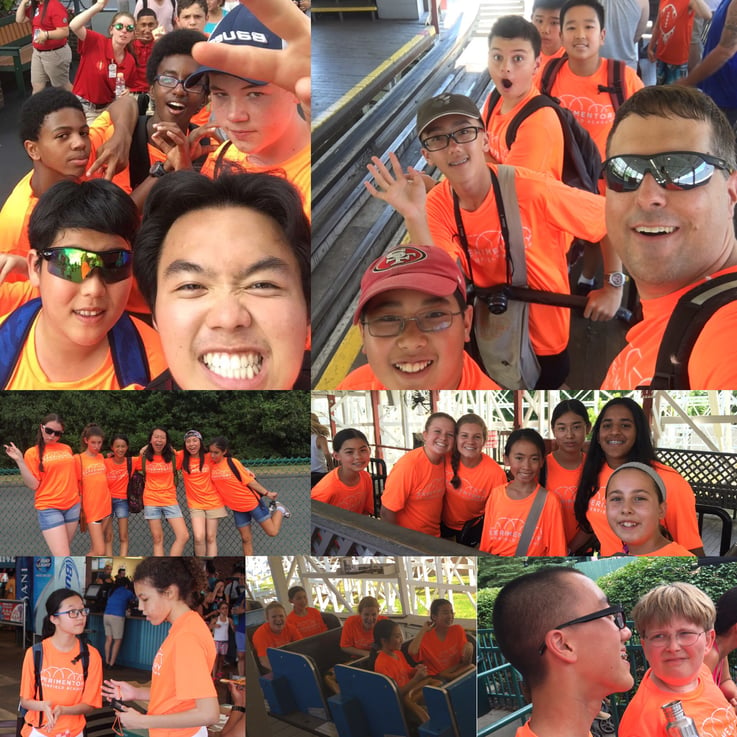