At the Experimentory, we’ve been busy designing houses, creating superheroes, giving speeches, holding music concerts, and doing crafts. But we’ve also been busy making friends and getting to know each other. After our first week together, Media Manager Kayla Corcoran reflects on community life at the Experimentory.

As the last ebbs of sunlight peek through the great glass windows of the library’s reading room, I am reminded that Sunday night is a good opportunity to pause and consider what it is we’ve been doing this week at the Experimentory. The days here pass quickly as we move from one activity to the next, throwing all of our energy into the present moment. But even though we have been together for less than a week, we have settled into the rhythms of community life, flowing alongside each other like the Deerfield River meandering behind our campus. We head out to breakfast at the same time and share meals throughout the day; roommates have negotiated shower schedules; teachers and students understand and respect each other in the classroom; we know each other’s names; we have talked to each other about the books we’re reading; we’ve climbed ropes courses and bowled and laughed until our stomachs hurt. We’ve started to build a community.

Like ripples from a rock thrown into the river, community is built from concentric circles of togetherness that surround the initial point of impact. If any one student or teacher or proctor or staff member is a stone, the largest ripple is the Experimentory itself, encircling us. But in between the stone and that largest ripple are all of the other, smaller circles of community, no less important for the ways they allow us to get to know each other better.

Students have communities of just two with their roommate - a relationship they have to get used to but also one that they can rely on, beginning and ending the day together. Then, there’s the hall. Teaching fellow Ms. Insuik loves the dorm because it’s “fun to see the students in a more relaxed setting.” She added: “It’s my chance to talk to them one-on-one and to get to know them better.” Before brushy-washy, dorm life provides an opportunity to talk about a bunch of things under the sun: from the latest Chinese television shows to making homemade silly putty (here’s a tip: don’t use dryer lint), to home and families, and of course, to just talking about how the day went. 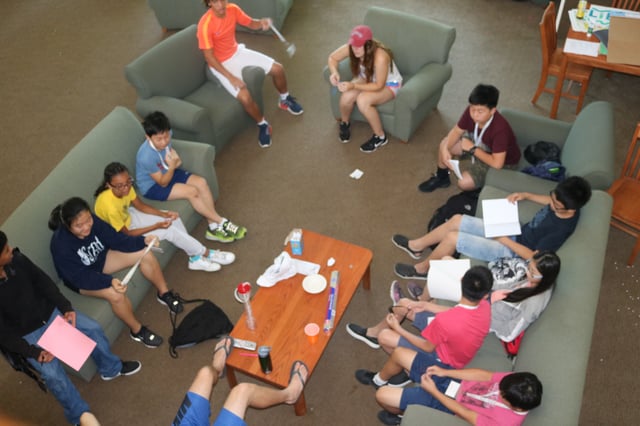 A bird's eye view in the Crow Commons of the Hypothetical Debate unfolding.

Outside the dorm, we find community here in cluster time and co-curriculars and at meals. Most of our students are trying things they’ve never tried before, but when they fall or take a misstep, their peers and teachers are there to cheer them on. This morning, for instance, the proctors sponsored a Hypothetical Debate where students, grouped in teams, had to come up with arguments to silly questions, like, “What’s the worst superpower to have?” Floating around taking pictures, I couldn’t help but smile to see students regrouping with each other to go over their points, and then to see others stand up and present those points confidently. Proctor Ellie remarked: “In the debate workshop it was really great to see the kids on teams together cooperating in a way that they wouldn’t have been able to last week.” After working together in and outside of the classroom for several days, however, the students are beginning to understand more about themselves and each other, leading to more fruitful collaboration.

But building community, folks, is sometimes messy! Take this morning, for example, when the proctors supervised Part I of what I hope becomes the Experimentory’s Annual Pudding Feast. In pairs of two, students were tasked with putting together mudpies (don’t worry, we’re not feeding your kids dirt). Mudpies are layered desserts with pudding, crumbled cookies, and gummy worms. The trick, though, was that one student had to be blindfolded while the other gave directions and guided their hands on where to put the goodies. Sure enough, there were crushed Oreos all over the table and pudding smeared on fingers. But everyone got the job done, trusting their partner to lead them safely towards deliciousness. “Ooooh,” Megan laughed, “it was so messy.” “But it was tasty!” yelled Carolyn.

Whether we’re dealing with pudding or parts of our identities, our community here depends on kindness, trust, and respect for the ideas and skills that each one of us brings to the table. And so, at the end of our first week at the Experimentory, it’s been awesome to see all of the talents that our students (and staff!) brought with them to campus. We can’t wait to see what’s in store for week two!