This past Tuesday night was another engineering night here at the Experimentory! Mr. Wilson--our special guest from Session 1 returned with some fun, new character-and-creativity-building challenges.

Upon arrival, we divided into eight groups, each around their own table: seven tables of students and one table of proctors. (This was, naturally, the best table, of course.) Mr. Wilson opened with a puzzling image: a man, apparently underwater, with a fish on a leash. His question to us: can you walk a fish? Any possible answers weren't as important as the underlying implied question: how do you tackle an unconventional, seemingly impossible, previously unconsidered challenge? 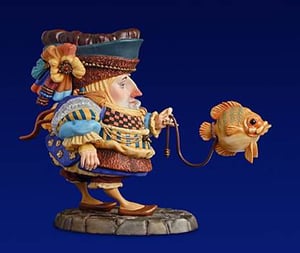 Our first activity had us consider a simple fork. We see forks everyday without giving them a second thought. Our challenge: think of as many crazy, unique uses for a fork as possible--the more outlandish the better. The groups found use after use for our utensils: Meat tenderizer? Sure. What about something to stick in the wall to hang things from? (Parents might not like that one as much…) Maybe if you heat it up you could use it to cauterize a wound? And a well-cleaned fork could be useful in surgery! (Please don't try these at home.)

After that thought-experiment, we were given a much more tangible exercise. Every table was given a number of items: a giant sticky note, a long piece of twine, a two foot piece of masking tape, twenty strands of uncooked spaghetti, and a marshmallow. We were to use the materials to build the tallest tower possible with an intact marshmallow on top. We had only eighteen minutes to plan, test, and build.

All of us began by planning our designs on the papers. The biggest question was how to divide our limited resources between strength and height. Would a triangular base be enough, or should we make a square base? How should we distribute the tape? Should some spaghetti be used to make horizontal reinforcements, or should all of it go towards maximizing height?

When time was up, towers stood (or didn’t) around the tables. The tallest was twenty-three inches, while the next few runners-up were all about twenty. The rest were significantly shorter: some builders had been too ambitious and the their towers tumbled, while others were too cautious. But every team learned about what worked and what didn’t. 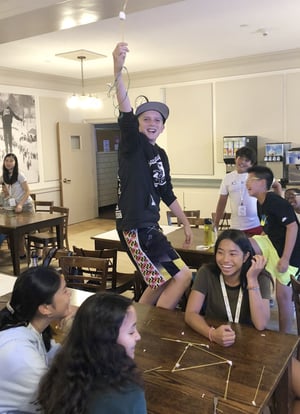 The point of the exercise, Mr. Wilson explained, was to show how teams worked together to reach a goal in the creative process. He identified planning and testing as twin key elements of the project. This exercise has been done with many different groups of people: CEOs, retail managers, engineers, and other professionals. Thankfully (considering they build our buildings, bridges, and machines), engineers tended to do the best in the challenge, on average reaching around thirty inches. Surprisingly, though, groups of kindergarteners were often in the top. They may not have had "worldly experience,” but they instinctively tested their towers as they built.  That assured that whatever structure they built would remain standing.

The other essential element in this project was team collaboration. In some iterations of the experiment, teams that were offered a monetary reward for creating the tallest tower. These teams typically did not have a tower standing by the end of the exercise. The reward created pressure within the team, and the focus on the end product rather than the creative process. Together collaboration, planning, and testing create the perfect creative team, and accomplish anything, even walking a fish.