When we challenge our students to maximize their creativity and character, we aren't just setting the bar high for them. Our faculty and staff strive to give our students every opportunity possible to accomplish that maximizing. 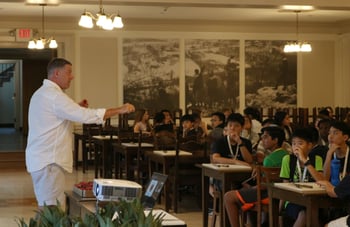 Last Wednesday, we had a break from our normal daily schedule. Instead of student led activities after dinner, all of our students made their way downstairs to the Parker Room -- Deerfield's secondary Dining Room. Upon entering, we divided ourselves between the  tables across the room. There was a mysterious preparation awaiting us: A screen flanked by our guest speaker, Mr. Wilson, accompanied by baskets of strawberries and pineapples, and cutting boards with carving utensils at each table. What was going on here?

Mr. Wilson stepped forward and introduced himself along with his assistant for the evening, his son Max.

Mr. Wilson is an engineering professor at the University of Amherst, but he also has interests in business and entrepreneurship. He introduced us to Polineering, a concept made for Experimentory if ever there was one. "Polineering" combines its two roots: “Poli”, meaning many, and “engineering”, the process of creating things. Polineers are responsible for every stage of the creation of a product. The product itself must be appealing and intuitive; the plan to produce it must be efficient and safe; and then it must be marketed. Polineers clearly need to maximize their creativity.

For our first taste of Polineering, each group was given strawberries and told to make them more appealing to potential customers. The groups took many different approaches. Some used the resources we had been given to make something new: strawberry jelly or paste, for example. Others focused on advertising and spread claims that their strawberries contained a powerful medicine. Others took a different approach still and found a new mascot outside: Mr. Worm.

The strawberries, apparently, were just a warm-up. For our next task the student groups would create a product out of a pineapple. This time, Mr. Wilson warned, we could not simply claim that the pineapple could cure any disease. As polineers we would have to come up with a viable plan to create a physical product that would be presented at the end of the challenge. We would be judged on a variety of scales: sanitation, safety, efficiency (in this case the number of cuts on the pineapple), waste, and appeal.

At the end of this exercise, we had a much wider variety of products. Some kids focused on having as little waste as possible. They just removed the pineapple's skin. Many others opted for efficiency and cut the pineapple into simple but appealing slices. All, however, had creative and unique presentations. A few made pineapple “boats” out of the husk that served as a bowl. Some compartmentalized their pineapple so that it slid out in neat, bite-sized pieces. Others were artistic, creating sculptures and scenes, such as a pineapple beach and a very thought-provoking squirrel. Many of the students utilized the strawberries from the previous activity to add color or create an accompanying strawberry sauce.

Mr. Wilson finished his presentation be describing what it means to be a Polineer: to work hard, and think collaboratively and creatively. We wrapped up by enjoying some fresh pineapple slices, distributed by Max, and a new perspective on what it can mean to maximize creativity.