Character in the Classroom

I stopped by our afternoon Sustainability class on Monday. The four-week class will be studying what it might take to create a self-sustaining aquaponics system capable of supporting a colony on Mars. But rather than digging through potting soil or programing water pumps, I found them in a discussion circle. "What might be another good class rule?" Mr. Bakker asked. 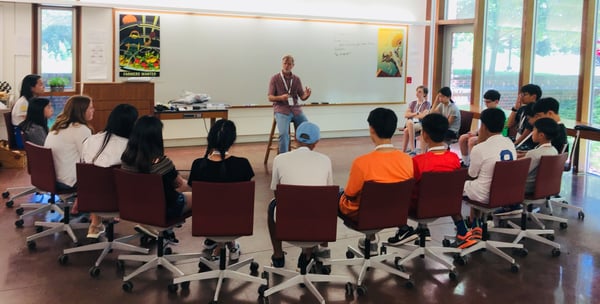 A student raised his hand: "Don't ask questions that have already been answered." There were nods all around. As serious students, these kids expected themselves to pay attention. "Not bad... But what if you forgot the answer?" Mr. Bakker smiled knowingly--almost sheepishly--as if he were thinking of himself as much as his students. Questions (even repeat questions) are essential in any lab, but in aquaponics an unasked question could result in a tank of belly-up goldfish. In the end, they settled on a revised statement.

The first days of each Experimentory session a lot of time is spent establishing the common ground that supports everything else we do. We want to be a learning community, and community falters without shared values and expectations.

I found our budding philosophers in Ethics class establishing class rules in a fashion well-suited to their discipline. Rules are supposed to make sure you do the "right thing"--but what is the "right thing?" They had a list of possible answers on the board, covering

culture, instinct, altruism, self-preservation, and, as I walk in, utilitarianism: make sure the good outweighs the bad. "But that brings us back to the Heavy Man..." Ms. Melvoin is referring to the classic trolley problem they discussed at the start of class. "Would it be right to purposely kill one to save five?" Students seem unsure. Ms. Melvoin brings them back. "I love this quote from Socrates." I cannot teach you anything, reads the quote on the wall. I can only make you think. "This is my hope for this class: I'm not sure how many solid answers you'll go home with, but I can guarantee we'll make you think."

Of course there comes a point when these deep questions aren't enough for day-to-day living. Next to the "Right Thing" list on the board is another labeled "Norms"--principles the class agrees to operate by. Evan offers a suggestion: "What about 'Don't make things personal?'" Ms. Isuik is pleased and adds it to the board. "Yes! We'll be discussing some sensitive and divisive subjects in this class. We need to make sure that disagreeing on ideas doesn't become personal."

Character on the Field

By Monday afternoon, after our first full day of classes, students were ready for some co-curriculars in the sun. Students split up to enjoy all kinds of activities including swimming, squash, soccer, arts and crafts, dance, and ultimate frisbee. On this particular day, I went with the Frisbee group to the field in front of the library to meet up with Mr. Sakach.

Many sports and group activities like co-curriculars can be great ways to build character through teamwork, collaboration, and strategy, but Ultimate Frisbee especially emphasizes character. As a self-refereed sport, "Spirit of the Game" is an important Ultimate principle. Players need to both work with their own team and be prepared to work with the opposing team to resolve disputes between players. More than that, Spirit of the Game is a broadly encompassing idea that brings together ideas of sportsmanship, teamwork, and compassion.

For now, though, it was only the first day of practice, and we all needed to learn how to

play first! Some kids had played Ultimate Frisbee at their schools while others had only thrown a frisbee a few times, but everyone began with some simple exercises to get accustomed to throwing. Mr.Sakach demonstrated a few of the different throws and catches and we all split up into pairs to get started. Spread out across the quad we threw frisbees high and low, and experimenting with different techniques to see which we found effective.

As the end of practice approached and throws and catches became more confident, we were finally ready for a real game! The rules were simple: when you have the disk, you can’t move; if you drop the disk or it is intercepted it goes to the other team; if you catch the disk in the end-zone you get a point. As we began, players were sprinting left and right, trying desperately to get open! Vignan threw the disk way down the field, only for it to be intercepted and thrown back by Ken! A few sharp passes later, the yellow team made the first point of the game, just in time for the Mrs. Pitt to announce the end of cocurricular, a real buzzer beater (without a real buzzer), and a great way to end practice. 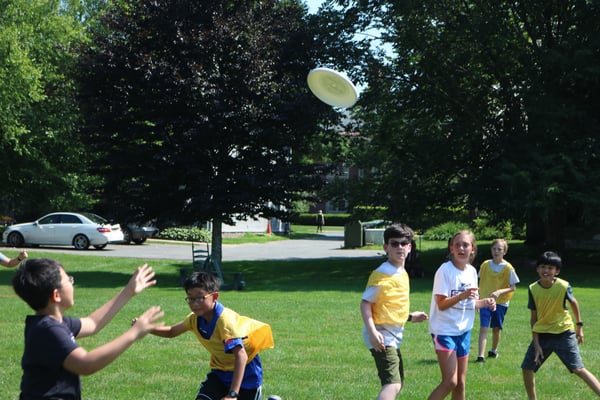