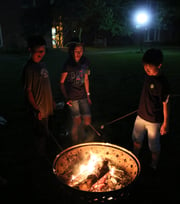 Our final days at the Experimentory were a whirlwind: the students prepped for the Showcase, shared s'mores together, signed each other's Experimentory calendars, welcomed parents and families and friends to campus to share what they had been working on all summer, and, perhaps most difficult of all, tearfully said goodbye when it was time to leave. Media Manager Kayla Corcoran reflects on the program's final days.

On Friday night, the mosquitoes danced around our ankles and the sky was full of stars. Smoke billowed up gently from the bonfire, where the students stood around toasting (some, burning) marshmallows to pair with graham crackers and chocolate. Across the quad a volleyball game was going on, animated by the shouts and screams of the students, who had recruited several proctors and teaching fellows to join in league with them. Still other students lounged inside the dorm in the common room, getting in a last minute game of cards or chasing after someone to sign their calendar. It was a perfect summer night: a spectacular ending to a summer that has been full of learning, imagination, and friendship.

Reflected Ms. Steim: "It's so hard for the students to say goodbye to each other, but what a wonderful testament to how formative and meaningful these weeks have been for them. It's clear that they all see being here, being with each other, learning all that they did, as a gift."

And what did they learn? A whole bunch, it turns out. While cleaning up in the library the day after students departed, I found a list compiled by the students of all that they had learned in Film + Music this summer: how to make drum beats, why the score of a film is so important

(it shapes the viewer's emotional response), and how to set a scene, among others. What struck me then, as I read through the list (an entire full page!) was that the students had learned more content knowledge this summer than probably any of us could have expected. When you love what you're learning about, more "stuff" is likely to stick (three cheers for brain science!). More striking, though, was that the students had taken all of those things on this list and applied it in their final projects. They had dreamed up ideas, storyboarded them, framed the shots, composed the music, edited the images, and pieced all of it together. They had made something, and they had followed the process from beginning to end.

This was also the case for Theater + Electronics and Architecture + Culture. In the beginning of the summer when I spoke with Mr. Thrasher about his cluster, he mentioned that the two disciplines are not as unlikely a pairing as one would imagine. "An actor always needs lights

and sound!" he proclaimed. And so, appropriately, his and Mr. Bakker's students created their own lights and sounds. In their final plays, they were bank robbers, time travelers, robots, and awkward teenagers going on first dates that were being sabotaged by parents. They had flickering lights, a time machine, robot hard drives being rewired, Taylor Swift music being blasted at top volumes when doors opened, laser lights meant to act as security devices, and a light-up Not-A-Weather Machine. And they designed all of these props and effects by themselves. They, too, had concocted stories and written scripts and rehearsed and performed. They created. From beginning to end, they did it all.

Okay, so the students in Architecture + Culture never built actual homes, but given a few more weeks, I wouldn't have been surprised if they actually had! Through visiting homes in Historic Deerfield, local farms and greenhouses where produce is grown organically, and

restaurants in the area serving up that local produce, students stepped into the journey of not just food production, but of culture sharing and preservation. And then they stepped into the kitchen, chopping, mincing, searing, boiling, and seasoning. They prepared dishes from mr us that they had created for restaurants they had imagined to go inside multi-purpose buildings they had designed (phew!).

Project-based learning is powerful because students can see their ideas out through to the end, encountering all the challenges and joys that come along with the process. Learning becomes real, with authentic stakes. Things matter. Families and friends watch your movies. They eat your dishes. They take in your performances.

It makes sense that it would be so hard for our students (and us!) to say goodbye this week, to the Experimentory, but also to each other. As Mr. Schaffer put it in his final word of advice to the students: "Find good people who you enjoy working with. That's 90% percent, right there." Living together in the dorm, climbing on a ropes course, competing in the Color Wars, hiking to the Rock, and trying out new co-curriculars with each other were learning experiences just like all of the cluster projects our students did. As in the classroom, what they accomplished, they accomplished together. And, as in the classroom, what emerged from those beginning-to-end experiences was real and authentic. This time, not just films and food, but friendships.

Thank you to all of our students for making this summer so special! We continue to be inspired by all of your creativity and character, and we hope you stay in touch to keep us updated about how you're applying what you learned here back at home.