Let's try an exercise in free association. Think about the phrase, "film production." What comes to mind? Is it comic books? What about French culture? Probably not--but perhaps it should.

This is the third year that the Experimentory has included film production as a subject of study. However, Mr. Correa came up with a fresh approach for Exp18 by combining film production with two of his other great loves: comics and French language and culture. Although his intent was to create an interdisciplinary course, these subjects aren't as disparate as you might think. Early cinema and comics as we know them today were developed in late 19th century to early 20th century France. You can learn many of the fundamentals of visual storytelling by studying the early French comics and film pioneers.

But why listen to my explanation? I sat down with Lauren, Olivia, and Peter this evening to discuss the class and learn about their first project. They began by describing what they've learned about the Lumière Brothers. 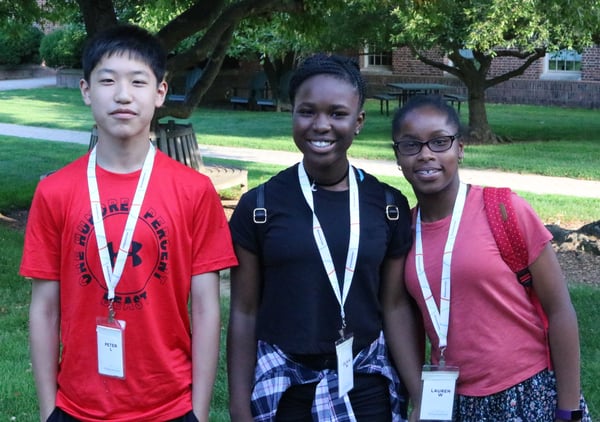 Olivia: The Lumière brothers produced some of the first films ever created. They were silent, black and white, and pretty short -- fifteen seconds to a minute. Back then they actually had to crank the camera to project it in movie theaters.

Peter: Creating movies weren't their original idea, but they borrowed it and improved upon it. Many of their films recorded daily life of people. Even if the scene was staged, they focused on daily life.

Here's a sample of the brothers' work.

After watching and discussing the Lumière's films, their first assignment was to create their own film in the brothers' style. Their film had to be:

I spoke with Mr. Correa earlier in the week about all these limitations. He believes they can actually be very productive. "If you want to make a new filmmaker freeze up, tell them to make any kind of movie about anything they want. The sheer number of options is crippling." Creativity requires limitation -- decisions to do one thing and not another. "By giving them limitations to start, their creativity can explore the space that's left."

"Who Threw the Books"

Lauren: We decided to make a comedic film.

Olivia: Peter got the idea from an old film he had seen in school.

Peter's inspiration was a short film about a homeless man being pursued by a police officer. He keeps rolling back and forth under a fence just as he is about to be caught. They decided to have a similar back and forth in the library. Here's what they came up with:

Peter: When we explained our idea to Mr. Correa, he told us that a really important aspect of comedy is timing. So we decided that when Olivia tried to see who threw the books, Lauren would duck at exactly the same time. And Olivia went to the other side, Lauren had already gone around.

Lauren: The joke is that it is supposed to seem like coincidence.

Peter: I didn't plan any of these details before filming. The way it all came together is really good acting by Lauren and Olivia.

Lauren: Mr. Correa and Mr. Sewall also thought ours was interesting because there a split in the middle of the screen that made it seem like there were two stories going on.

Peter: We didn't actually think of it as a split screen when we filmed it -- there was just a bookshelf in the middle.

Olivia: I think it also became funnier when we sped it up.

Lauren: Some Lumière films used jokes, but others were just fascinating back then because they were played backwards, or sped up or slowed down.

Olivia: So we decided to play our film at a little faster pace to make it more interesting.

Lauren: Since there is no speaking in the Lumière films, they had to exaggerate their body language to show how they were feeling if the story was to make any sense. I think that added to the humor, too.

It's important to note that this was their very first project for Mr. Correa's class -- they completed it on Monday afternoon. They have one more film project under their belt since then, and have just started their studies in comics. We have a lot to look forward to from our Experimentors!

Here are all of the Experimentor's Lumière film projects. Enjoy!