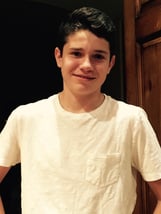 Why did you choose to participate in a summer program? What drew you to the Experimentory?

Every summer my parents encourage me to go somewhere or do something that I have never done before.  The Experimentory appealed to me because my favorite class in school is in a lab which focuses on innovative technology.  Since I live in Southern California and had been exploring boarding schools, I wanted an East Coast experience which would allow me to creatively pursue my interest in science and at the same time introduce me to life at boarding school.  The Experimentory at Deerfield Academy seemed like the perfect fit.  I loved the idea that I could experience challenging classroom lessons at the same time as having a fun social schedule!

What were your favorite team projects? What role did you play?

The fact that we were able to choose from multiple clusters for our classroom lessons made the summer very interesting and it was difficult to pick!  All of the clusters were built around a project that was team/group oriented, and it was incredible to see the improvement in our projects from the first draft as compared to the final version, and to realize that each member of the group contributed to this improvement.  One of my favorite assignments was in my Music + Film cluster. I had worked a lot with my GoPro back home, but this class brought my knowledge of film making to a whole new level.  We worked with real cameras, sophisticated editing software and had to do everything – write the script, act in and direct the movie, write and produce the musical score, and edit the final project.  Everyone played a character in the movie, and everyone helped with the other tasks.  Because we worked so closely together, kids that were strangers at the beginning of the class became some of my closest friends that summer.

Tell us a little about the friendships you made at the Experimentory.

In addition to the friends I made in my course clusters, my closest friends were the people that I lived with in my dorm.  I lived on Doubleday 2 and the dorm life was a great way to bond with people from all over the world.  I had never been away from home for 4 weeks, but I felt like I had a built-in family with the living arrangements.  Because we knew we were going to be together for a month, all of my hall mates made a true effort to get to know each other.  The relationships we formed in the dorms enhanced our classroom time together and our social outings. Two of the main events that were memorable for me because I became very close with my hall mates were the trip to Six Flags and the ropes course.  The hall proctors, most of whom were recent Deerfield graduates, were very involved in our day-to-day life at the program and they became friends as well.  I stay in touch with several of my Experimentory proctors and friends worldwide.

What is one important thing that you learned or one way you grew because of your time here?

The Experimentory made me a more independent and confident person because it was a very safe place to try something new and take risks.  The collaborative nature of the program meant everyone was “in it” together and you weren’t afraid to fail if you were trying to do something for the first time.  One specific example I recall was my

participation in the talent show.  My friends and I each had some skill (vocal, instrument, dancing) so we decided to form a band and perform.  But, we had very little time to practice and on the day of the show, we had to get out there and just do it!  In spite of our apprehension and minimal preparation, we performed to an enthusiastic and cheering group of our peers.  The performance was not perfect technically, but we had the time of our lives and were wholly supported.

What would you say to someone thinking about applying?

Don’t think about it anymore, get on your computer and apply!  The Experimentory is a unique program experience.  It is a great balance of school work, outdoor adventure and fun.  When my dad came to pick me up at the end of month I had very mixed feelings.  I was very happy to see him and was excited to show him my movie and our other projects, but I was sad to leave Deerfield and my new friends.  I have been at several other camps over the past years, but The Experimentory was the best summer experience I have ever had and I highly recommend it to anyone who is considering applying.

Max was an Experimentory student in our 2016 program. And if you're interested in a summer that will make you grow in character and creativity, head on over to our Application Page!